What are the Sources and Effects of PM2.5?

What is Particulate Matter? What is PM2.5?

Inhalation of particulate pollution can have adverse health impacts, and there is understood to be no safe threshold below which no adverse effects would be anticipated. The biggest impact of particulate air pollution on public health is understood to be from long-term exposure to PM2.5, which increases the age-specific mortality risk, particularly from cardiovascular causes. Several plausible mechanisms for this effect on mortality have been proposed, although it is not yet clear which is the most important. Exposure to high concentrations of PM (e.g. during short-term pollution episodes) can also exacerbate lung and heart conditions, significantly affecting quality of life, and increase deaths and hospital admissions. Children, the elderly and those with predisposed respiratory and cardiovascular disease, are known to be more susceptible to the health impacts from air pollution. Potential mechanisms by which air pollution could cause cardiovascular effects are described in the Committee on the Medical Effects of Air Pollution (COMEAP) report “Cardiovascular Disease and Air Pollution”.

Human-made sources of PM2.5 are more important than natural sources, which make only a small contribution to the total concentration. Within UK towns and cities, emissions of PM2.5 from road vehicles are an important source. Consequently, levels of PM2.5 (and population exposure) close to roadsides are often much higher than those in background locations. In some places, industrial emissions can also be important, as can the use of non-smokeless fuels for heating and other domestic sources of smoke such as bonfires. Under some meteorological conditions, air polluted with PM2.5 from the continent may circulate over the UK – a condition known as the long range transportation of air pollution. Long range transport, together with pollution from local sources, can result in short term episodes of high pollution which might have an impact on the health on those sensitive to high pollution.

In addition to these direct (i.e. primary) emissions of particles, PM2.5 can also be formed from the chemical reactions of gases such as sulphur dioxide (SO2) and nitrogen oxides (NOx: nitric oxide, NO plus nitrogen dioxide, NO2); these are called secondary particles. Measures to reduce the emissions of these precursor gases are therefore often beneficial in reducing overall levels of PM2.5.

Primary emissions of PM, the formation of secondary PM within the UK and long range transport of pollution from outside the UK all contribute to regional PM levels across the UK. Local primary emissions are also important in urban areas. 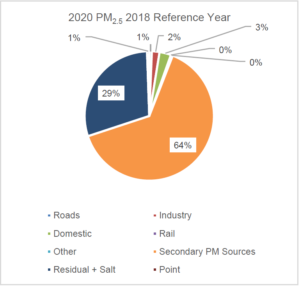 With the exception of ozone, concentrations of air pollutants are generally higher in urban than rural areas. For PM2.5, there is a gradient in concentration across the country with higher concentrations found in the South East than other areas. Within cities, air quality (particularly in relation to concentrations of PM10 and NO2) tends to be worse close to busy roads, where poorer communities often live.

For further information on this subject, please refer to the UK Compliance Study Action Plans and the latest Air Pollution in the UK report, plus the documents linked below.

All content is available under the Open Government Licence v3.0, except where otherwise stated.

This website uses cookies to improve your experience while you navigate through the website. Out of these, the cookies that are categorized as necessary are stored on your browser as they are essential for the working of basic functionalities of the website. We also use third-party cookies that help us analyze and understand how you use this website. These cookies will be stored in your browser only with your consent. You also have the option to opt-out of these cookies. But opting out of some of these cookies may affect your browsing experience.
Necessary Always Enabled
Necessary cookies are absolutely essential for the website to function properly. This category only includes cookies that ensures basic functionalities and security features of the website. These cookies do not store any personal information.
Functional
Functional cookies help to perform certain functionalities like sharing the content of the website on social media platforms, collect feedbacks, and other third-party features.
Performance
Performance cookies are used to understand and analyze the key performance indexes of the website which helps in delivering a better user experience for the visitors.
Analytics
Analytical cookies are used to understand how visitors interact with the website. These cookies help provide information on metrics the number of visitors, bounce rate, traffic source, etc.
Advertisement
Advertisement cookies are used to provide visitors with relevant ads and marketing campaigns. These cookies track visitors across websites and collect information to provide customized ads.
Others
Other uncategorized cookies are those that are being analyzed and have not been classified into a category as yet.
SAVE & ACCEPT
Powered by